A downloadable game for Windows, macOS, and Linux

you're tasked to hunt a dragon... but she is so cute?!
game features about 4000 words, so it can be comfortably played in one sitting!

four different endings including the one true end with cute trans lesbians!!

consider buying my 10 page artbook! its a great way to help me out and also get some exclusive details and background info on my game. it includes bunch of concept art and thoughts about the characters!

everyone who supports me on patreon also gets access to the artbook!

if you liked the game and want to support me doing more games, consider checking out my ♥patreon♥ to support my per game release! to keep up to date with my game projects follow me on my ♥ twitter♥ .

thank you so much for playing my game i hope you like it!

that game is good

The plot is that of a generic romance VM, which is fine. My main issue is how OP both the dragon(not using her name for spoilers) and amanda are. I would've liked to see more struggle in the bear fight and the dragon to not have jumped so high AND thrown the bear with ease. Otherwise, good work. I will say, though, the constant "yah" instead of "yeah" did get a bit annoying. Good work tho, keep it up.

trans lesbians hella cute, my only complaint is that it's so short, wish I could see more of them

The plot is nothing special but the art style is absolutely amazing!

why is this game so fucking cute?? ;)

pretty cute, i liked it. tyvm for makin it! the MC was kind of rude, but hey w/e, at least she had actual character lol, usually MCs are just cookie cutter af u know? good stuff, thx again

First off, this game has to be the cutest I've seen made by you, ever since I've started playing your games. The soundtrack in this game, (like most in your games with a soundtrack) is very captivating and goes very well with the overall tone of each scene, and environment in the game. The characters all seem really realistic much like the characters in your other titles, which is to be expected due to the overall quality of your games thus far. I loved the story of this game, and honestly look forward to more games based in this "universe" or whatever you wanna call it. The artstyle is really cute, as well as the general interactions between characters as well as the expectation is in most of your titles

Also, I understand that I gush about your games, and I don't want you feel like you're supposed to live up to a certain standard( if thta's what my reviews end up making you feel like, but if not I guess I'm just talking out of my ass), and I'd love your games no matter what. I always give fair ratings in my eyes, and your games really do total up to 5-Stars. So please, if you are, don't be stressed over it

Well, thank you for coming to my Ted Talk

P.S. The short lil romance story in this game be hella cute

omg this is such a cute game! it's nice seeing "monsters" being so sweet :)

thank you! :> its fun to explore that side!

For some reason whenever i try to download this its says a file is missing from the game and i don't know what to do can you help?

i dont know. are you extracting the whole folder instead of just the exe?  if yes maybe just try redownloading the whole thing im not sure as ive never run into this problem before! sorry! :x

Easily one of the cutest visual novels around. It's adorably awkward, beautifully drawn, and has charm down to its roots. It also has a super cute dragon!

thank youuu!! <3 ive kept you and your comment during your stream in mind when working on my current one!! awkward lovey dovey stuff is the best ^^

i finally played this after wanting to for ages and its so cute <3 the art, colors, gui, music and backgrounds all come together to give a really relaxing feeling that makes the game seem really professional! you did such a good job of making a sweet story with little conflict stay engaging for the player...also trans wlw. bye. wig.

This is really gorgeous!! Teared up in the last scene, cause they are both too cute :')

Really love the art, especially the background. This is a goreous setting you have created.

Reply
The Jester Guy4 years ago(+2)

And I agree with some comments here: a sequel would be an interesting idea, where both characters continue from the ending the player chose, work their relationship up, deal together with possible prejudices from other people and, who knows, have an optional "poly" choice. Because you may never know if other cute dragons will show up in the city. ;)

Anyway, thanks for this game, and have a nice weekend.

thank you! :> i do like the idea of exploring more often characters but for the near future i have plans for brand new games and characters i want to show!

ur best game yet !! the art is lovely, esp. the colors. the scope of the game was perfect, too; it told a satisfying & self-contained story but felt like it took place in a much a larger world that really piqued my curiousity... i'd love 2 see more of it in the future ! 10/10 A++

thank you so much for your comment! im so happy to hear you liked it :>

Just finished playing-- and it was so much fun! Wah! Love seeing these two get the job done and then have a smooch! *V*c A sequel would be very awesome and really fitting~

thank you!! sequel does sound fun i think drawing orupheneth in clothes might be worth all the effort :D maybe some time..

I absolutely, without a doubt, love the game. I am really looking forward to a chapter two or any other games made by you. IT'S GREAT!

hey thank you so much!! i dont know if ill do a direct sequel to this or anything but i  can 100% promise im going to be making a lot more games in the future that youre going to enjoy if you liked this one ^^

Hell yeah! I'm sure they'll be as good as this one!

Why is this game so fucking cute??

This is an adorable and cute little visual novel - it's so sweet that it even raised my blood sugar levels. I really liked the art and the backgrounds. The vibrant colors really pops out and matches the light hearted humor of the story and characters.

The premise and presentation of the plot captured my interest pretty quickly and drew me in, but I admit that after the 'hunt' the pacing became rather odd. Going from  slaying a monster to having a nice, relaxing conversation over a cup of tea was a complete 180 so I wasn't expecting that.

Overall, this was a nice little read and I greatly enjoyed the characters' banter with each other. I especially liked the dragon's dialogue.

!! thank u for playing and making a vid ^^ thats so nice

Ahh!!! This game was so cute and sweet! I loved it ( and I love all of your other games too omg)

im so happy to hear that!! glad to hear you enjoy my games ! :D

This game, like the dragon, is so fucking cute. I love it.

Nice Work! And why is this dragon so fucking cute? XD

thank you!! :D and the answer is magic.. shes cute cause.. magic

This dragon REALLY IS so cute! So many of her reactions to or reasonings to explain non-dragon things were so charming. I wanted to pat her on the head so many times, even though she is so big.

I wish I could see some of her new fashions...!

hehe she deserves all the headpats! shes gonna look so cute w/ her new now-clothed-look  :> 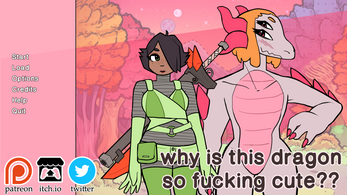 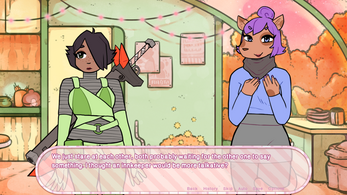 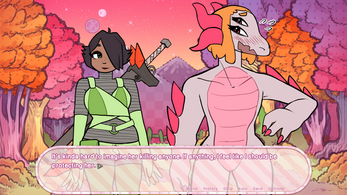 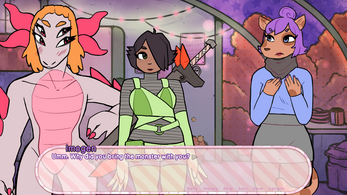 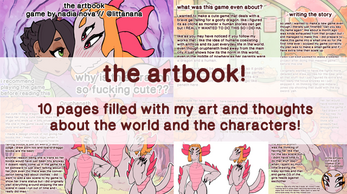